Kari Kemppi, who just retired this summer, has seen in his 40 years of work how an arc welding equipment manufacturing company founded by his uncle Martti Kemppi has become an international pioneer in the welding industry.

Kari started working at Kemppi in 1981. Back in the day, one main frame computer was found in the company, but the network connecting the computers and the internet was yet to come. The young man started his career as a rationalization engineer. His very first assignment was to design CNC programs for automatic punching machines, which made sheet metal casings for welding machines. In practice, Kari’s job was to mark x- and y-coordinates. As a passionate engineer, he began to think how the work could be automated.

“I realized that the dull work is more suitable for a machine rather than a human. I developed a system for automating the work phase. It was also the topic of my master’s thesis when I graduated from Tampere University of Technology a few years later,” Kari explains.

Building the first network for Kemppi

Still in the early 1980’s, Kemppi was a machine workshop. The share of electronics was still small, but it was growing.

“When I started my career, the production of the first welding inverters had just begun. The first complete product family, based on the new inverter technology, was at the project stage. The inverter technology revolutionized electronics’ role in production,” Kari explains.

Communication has also changed a lot. In the early days of Kari’s career, communication took place via telephone, telex and telefax. Memos were written on paper with a typewriter. There were computers, but Kemppi had no network. Working as Head of the Production Engineering Department, Kari decided to develop one himself.

“Kemppi testing stations had computer processors and monitors, but they did not communicate with each other. The world was different then. The stores had limited selections, and you even had to build the communication equipment yourself.”

By applying existing technologies, Kari and his team built up a ring network between testing stations. Eight new types of testing stations were built in total. They worked so well that they were used until the first decade of the 21st century when they were replaced by modern computers.

“The testing stations we developed are one of my finest engineering achievements. It was great that we succeeded,” Kari recalls.

In 1987, Kari was promoted as Production Director. At the same time, he became a member of the Kemppi management team, where he continued until the very recent years.

From a machine shop to a pioneer of modern welding

Kari has witnessed how Kemppi grew from a machine shop to a large electronics company in the 1990’s. 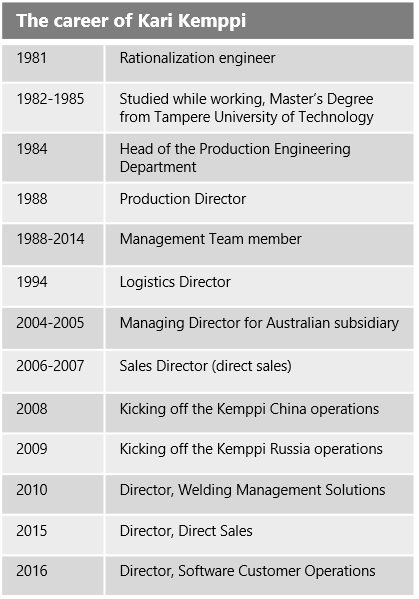 Digitalization changed the company’s operations, and the importance of software increased. Surface-mount technology took over in electronics. After the millennium, the software segment began to rise as its own business area.

“Customized arc welding processes, such as the current Wise products, proved to be very successful. Software and digitalization have gained a strong position in welding technology and the prospects for the future are almost limitless.

Kari has also had many opportunities to work abroad when Kemppi’s subsidiaries were established around the world.

Kari feels good about retiring. At first, he plans to focus on boating with his steel boat. In the autumn, he plans to continue his karate hobby, where he has a black belt.

He also plans to travel with his wife. Kari’s three children are already adults. However, Kari does not intend to become a gentleman of leisure; he has already listed himself in the international consultant register.

Kari thinks Kemppi’s future looks good. “The company has a lot of opportunities. There is still a lot to be achieved in the welding management software business, and same goes for internationalization.”

Welding Value uses cookies to ensure you the best experience on the website. By using this site you are agreeing to our use of cookies.OK